From Beaune, we took the train to Lyon.  This would be the final three days of our trip. From Lyon, we were flying back home to Canada.

Lyon….hum, a bit of a love/hate relationship with this city ❤️ 😡.  After having spent the last two weeks cycling the Alsace & Burgundy wine regions we think it might have been a bit of a shock to our system when we arrived in Lyon. We had been seduced by Alsace & Burgundy with its beautiful countryside and its quaint little villages. Arriving in Lyon we quickly realized we were entering into the hustle and bustle of big city life. Lyon, of course, being the 2nd largest city in France, after Paris.

We stayed in an Airbnb, Maguy is a Superhost. We did not get to meet her but her mother was sweet and so helpful. It was a very nice, modern apartment. The only downfall was the bedroom.  It was a loft bedroom and we had to climb very steep stairs to get to it. SO… be careful if you’ve had a bit too much wine! 🍷 Otherwise, it was a good price for this city and very centrally located.

After checking into our Airbnb we headed out to explore the quartier, Vieux Lyon. 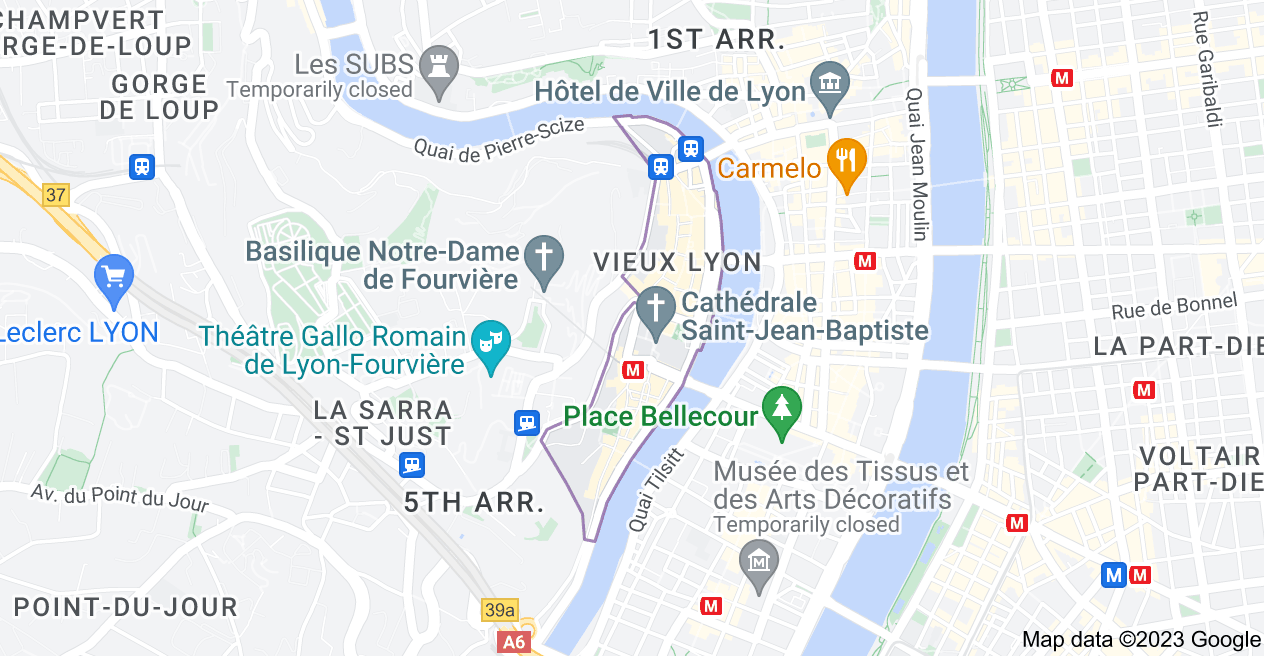 Fortunately, we were staying in Lyon for three days as just seeing the Vieux Lyon would have been a disappointing way for us to remember this city.  It just didn’t seem to have the charm that we often find in Europe. We probably should have returned there the next day but instead, we decided to explore the rest of the city. This ended up being a wise decision as we did eventually discover Lyon’s beauty.

As we walked around the city it became apparent to us why it is well known for its historical and architectural landmarks. It also has the UNESCO World Heritage designation. It is a city of unexpected views. It kinda feels like a miniature Paris. There is even a markedly Eiffel-ish tower atop Fourvière.  It has thousands of university students and we certainly saw a lot of them that first day in quartier Vieux Lyon.

We found this adorable little café that we ended up going back to for the three days we were there. The café latte and desserts were to die for. The name of this place was called Les Cafetiers, 36 rue Ferrandière.

Lyon has also developed a reputation as being the capital of gastronomy in France.    Paul Bocuse who recently passed (January 20th, 2018)  was a renowned chef and he certainly left his footprint everywhere in this city.

We were encouraged to eat out and to try a traditional Bouchon Lyonnais. This is a type of restaurant in Lyon that serves traditional Lyonnaise cuisine. The menus can often consist of sausages, duck or roast pork. The dishes are hearty and mostly focused around meat. We had checked out some reviews and on our last evening in Lyon, we ended up at Chez Lea La Voute.

This whole Burgundy trip will be memorable for both its food and its wine. It certainly had been our hope when we first set out to book this trip. I don’t think we will ever again enjoy so many amazing wines in such a short period of time. The reds of Burgundy are definitely complex and you quickly fall in love with them! 😊 ❤️.

On October 8th, 2017 we flew back to Canada with so many wonderful memories.